Need support for GhostBSD. Ask here if your question does not fit elsewhere.
Post Reply
6 posts • Page 1 of 1

Yesterday with what I assume was 13.0-STABLE 1300500, I signed in without difficulty and began the Update Station routine. During installation, I closed the virtual machine and saved its state.

This morning when I started the virtual machine I noticed a start of the operating system, which half-surprised me because I had no recollection of completing the installation. (Maybe I did complete it, in a previous VirtualBox session, and forgot.) An attempt to login (as grahamperrin) produced nothing more than a movable pointer on a black screen. I noted 13.0-STABLE 1300504 but did not tell the version of guest additions.

I activated then booted the one and only backup boot environment,

I had the same problem with an attempt to login as grahamperrin. First guess: a transient issue involving something in my home directory, and/or the mismatch between 6.1.22 on the host and 6.1.20 in the guest. Second guess: the symptom (black screen + movable pointer) is comparable to some transient problems recently observed with FreeBSD 13.0-RELEASE-p2 in VirtualBox – https://forums.freebsd.org/threads/80860/ – although honestly, this guess is stretching things (the topic there is inconclusive, I should not jump to conclusions here or there).

Without restarting the system, from ttyv1 I ran startx as root and got a working desktop environment. I created, activated then booted a new environment:

If I recall correctly: at this point (with the environment at 1300500, not yet updated to 1300504), boot in safe mode failed – there were two or more unexpected restarts of the OS (kernel panics, presumably). If I want to reproduce and diagnose this, later, I can use the outdated non-default Default boot environment. For now, let's assume that kernel panics were symptomatic of FreeBSD bug 254412 – emulators/virtualbox-ose-additions - Boot time crash - Sleeping thread owns a non-sleepable lock. Afterthought: the first boot, alone, would have been safe mode; subsequent (unexpected) boots would have been normal mode.

I interrupted the boot loop, started in normal mode, login as grahamperrin succeeded ☑

After waiting a few minutes with no automated hint of available updates, I manually opened Software Station, fetches began.

I clicked the update alert, not realising that a second instance of Software Station would open. I closed the second instance, leaving the first instance processing candidates.

Installation of updates is proceeding, I'll follow up after completion.
Top

Software Station did not complete. 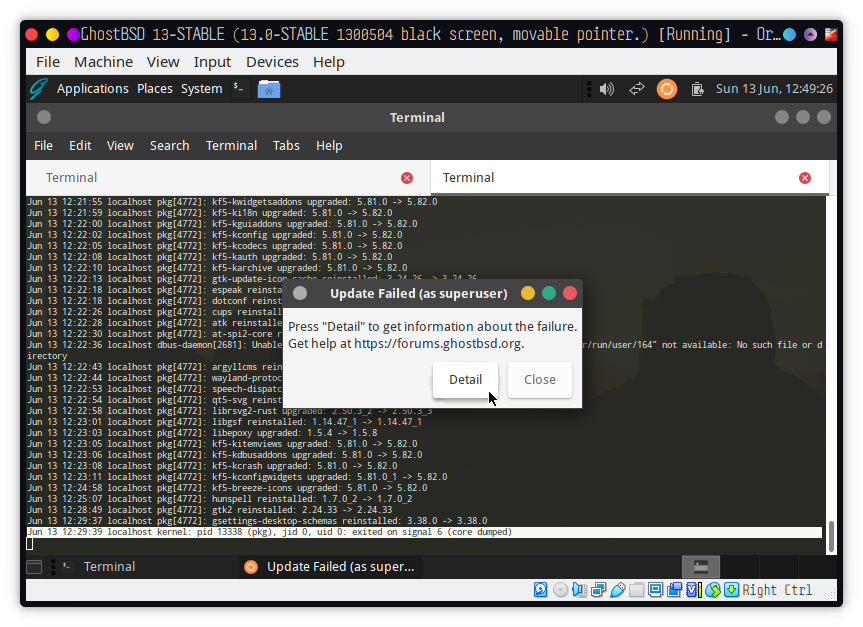 The machine has 2,048 MB memory at the time of writing, I assume that this is enough for Software Station and MATE Terminal (with the terminal doing nothing more than tailing /var/log/messages …). An earlier screenshot: 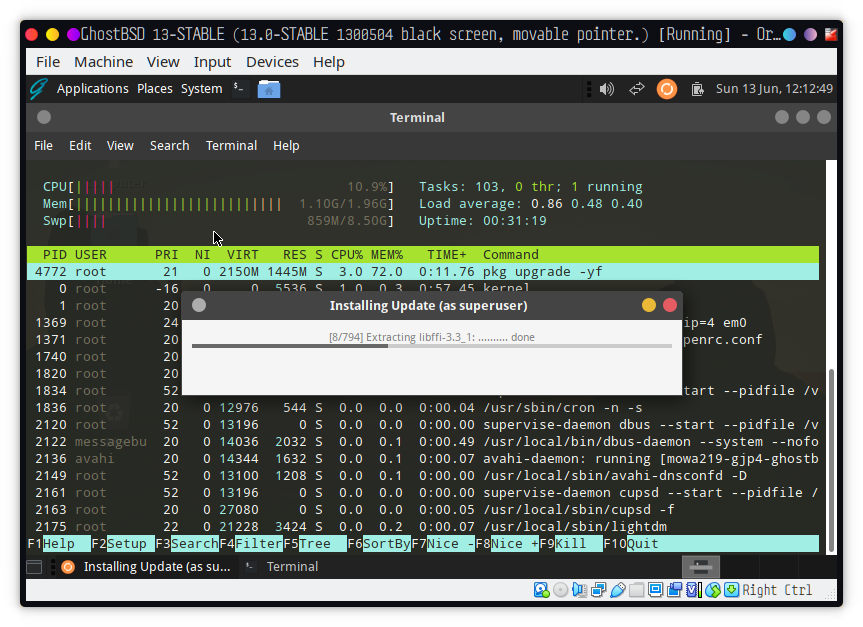 I'll log out from the desktop environment, not restart, switch to ttyv1 and run pkg upgrade as root.
Top

pkg upgrade, not including gnupg 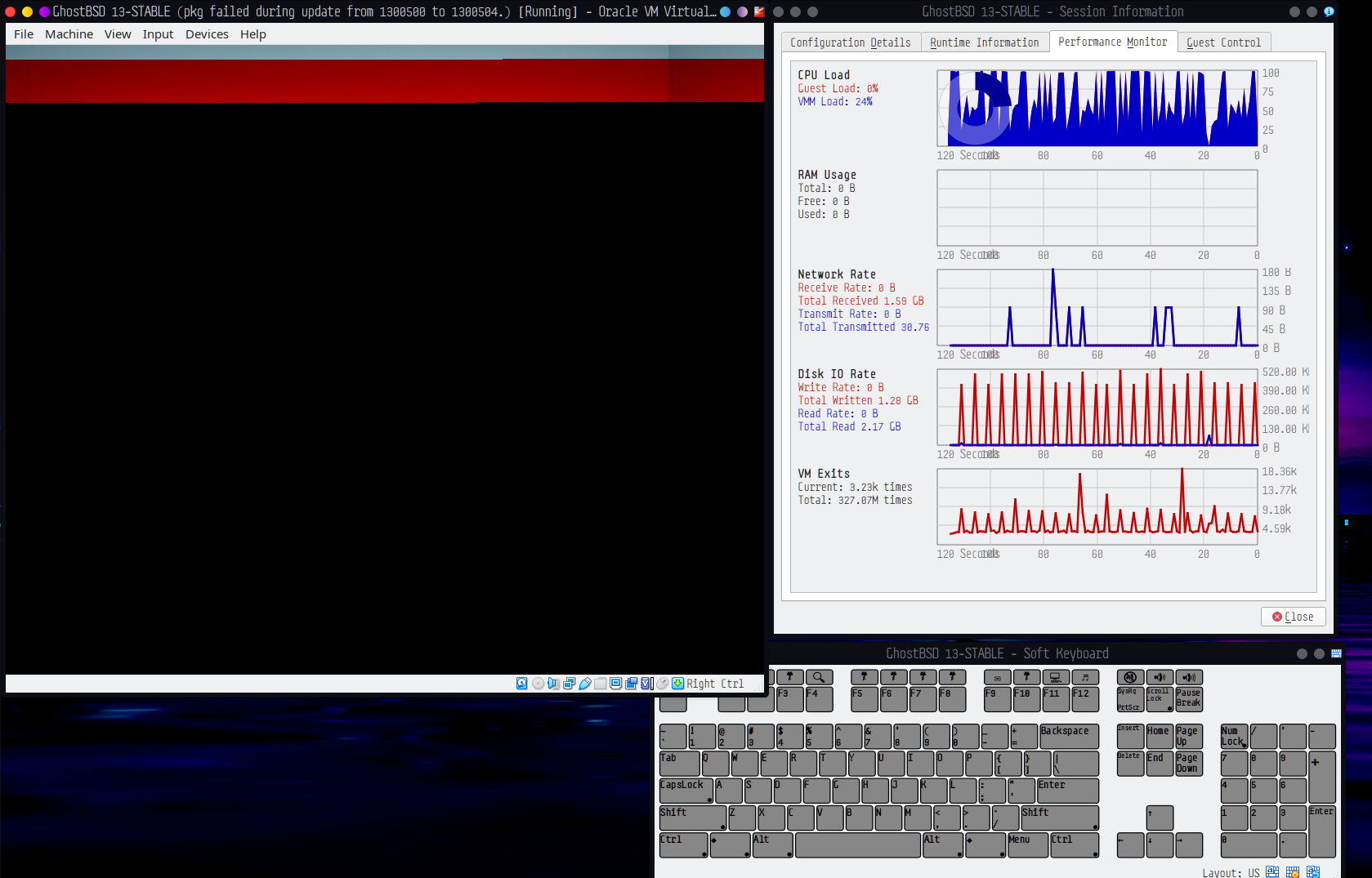 – so I switched back to ttyv8 then again logged in as grahamperrin.

With this run, the absence of gnupg is remarkable – it was in the partial last logged line for the prior (Update Station) upgrade routine.

I'll await completion of the current run then, to tell whether any file was missing:

No missing files when I deleted (then reinstalled) gnupg.

Let's assume that when pkg crashed earlier, the reinstallation was done; that the log (without the word done) was incomplete due to the crash.

Unfortunately, there's a sense of randomness. Whatever's wrong – I suspect that it's not an issue with GhostBSD, it's not (or not yet) easily reproducible.

‡ Most remarkable about this session, for which I have a VirtualBox snapshot, was misbehaviour in ttyv1. If I recall correctly: when I typed root and keyed Enter, the cursor moved to the next line (as if there was input) but there was no visible character (no sight of the word 'root') and no prompt to enter a password.
Top

‡ I restored then started this VirtualBox snapshot, recorded the screen (of the KDE Plasma host, with the Ghost BSD guest in sight) in a way that might demonstrate some of what was wrong with ttyv1; and wrong after logging in with LightDM. https://photos.app.goo.gl/WvVWRYstce1Nk8YLA

‡‡ Given the good state of GhostBSD at the time of this VirtualBox snapshot, I don't plan to investigate further here.

Instead, I'll probably focus on comparable cases (me and three other people) in FreeBSD Forums.

For the GhostBSD guest, I'm purging some older snapshots, to regain free space for the host.

Note to self, aim to retain this named snapshot for as long as possible:
Top
Post Reply
6 posts • Page 1 of 1